How Does Netflix Make Money in 2022 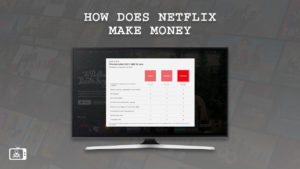 With over 220 million subscribers, Netflix is currently the most popular video streaming service; Netflix generated US$30 billion in revenue in the financial year 2021, So you must be wondering how much cash on hand does Netflix have and how much money does Netflix make?

Netflix offers a variety of content. It has a huge library of Series, Documentaries, and Movies, with original content known as Netflix Originals and many contents that Netflix buys from third parties through distribution deals. So how does the whole operation go, what makes Netflix the most successful subscription-based video streaming platform, and how does Netflix make money?

The History of Netflix

Netflix was not always this cool! Originally, it started as a Video Rental Company in 1997 by American entrepreneurs Reed Hastings and Marc Randolph. The creators of Netflix realized that renting a DVD was expensive, so they innovated the whole idea of renting a DVD and started a rental DVD service by mail which eventually became the giant we see today. At that time, only 2% of Americans owned DVDs, so the idea of delivering DVDs by mail became a total hit. Starting as a small business, can you guess how much money does Netflix makes?

For the first time in 2007, Netflix started to stream some of its content through the internet while retaining its original renting service. Due to innovative techniques, Netflix’s business started to grow exponentially. In 2010 Netflix expanded its business across the globe to Canada, Latin America, and the Caribbean. Gradually it became the streaming giant with millions of subscribers that you see today!

Over time we have witnessed that Netflix’s business model took a 180 degree from handing out physical DVDs to allowing subscribers to stream their favorite content at their own convenience.

These models explain how Netflix makes money from top to bottom. The streaming service and rental DVDs are the crux of its revenue generation.

How Does Netflix Pay for Movies?

To clarify things, we are talking about content owned by third parties and not original content, as original content has its own budget. As far as the distribution and licensing agreement go, we can’t make a precise guess because Netflix doesn’t disclose its deals publicly. Some information does come out from time to time.

When Netflix was not in the production business, they had to pay a lot more, even for low budget movies. Our initial assessment indicates that they used to pay somewhere between 40000$-60000$. But that has changed long ago now, Netflix is a major streaming company.

Since they don’t disclose their deals publicly, we can’t tell exactly how much they pay now, but surely, it’s more than 60000$. The Gray Man is now the most expensive movie on Netflix, which cost around $200 million, surpassing Red Notice, whose license was purchased for $160 million.

Apparently, adventure/action movie genre is mostly high budgeted, followed by sci-fi and animated movies, one of the best action movies on Netflix is The Batman having expenses around $185 million lies between The Gray Man and Red Notice.

It mostly depends on the potential that Netflix sees in the movie. There is no exact amount; it all depends on the contract. So, now you can imagine how does Netflix make money on squid game series which was a global blockbuster?

They Make $950 Million Per Month on Subscription Alone

The difference in price is based on,

Netflix operates in almost every major country across the globe, segmenting its subscribers efficiently and focusing on the right region for growth. To make operations easier, they have made several business segments; let’s discuss the statistics and growth in each segment.

The United States and Canada (UCAN)

Latin America segment LATAM is the company’s third-largest segment. LATAM includes Argentina, Chile, Colombia, and Mexico. The company has 29.4 million subscribers in this region. The company generated $2,795 million in revenue in 2019 in this segment.

Europe, Middle East, and Africa (EMEA) segment is the company’s second-largest segment. This region includes Spain, Belgium and other European as well as middle eastern and African countries. This region has 47.4 million subscribers, and it generated a revenue of $5,543 million in 2019.

The Asia-Pacific segment is the company’s lowest revenue-generating segment. However, it is relatively new and rapidly growing. With over 14.4 million subscribers, this segment generated $1470 million in 2019.

How do I sell my movie to Netflix?

If your movie is selected, you must sign a formal contract where every detail will be in written and legal form. Then, you must provide the company with your artwork.

With new competitors such as Apple TV and Disney+, the competition is getting much fiercer, with each company trying to grab its market share. Netflix will have to keep its content library updated.

What does Netflix pay producers?

Netflix pays for the licensing fee for movies that have been produced with some other production house cost. Generally, contracts are signed in which everything is documented.

Netflix has revolutionized the movie industry due to its paying mechanism.   For the original content, they pay producers the full cost of production; actors, writers, and everyone else associated with the movies are also paid upfront. Have you ever wondered how much cash on hand Netflix has? Almost $8,206 million.

Netflix has changed the cinema business forever; now, people prefer streaming at their convenience. A company that started renting DVDs is now the biggest subscription-based streaming service globally. With its innovative business model that explains how Netflix makes money, the company’s stock and the investor’s confidence are growing. How much cash on hand does Netflix have also speaks of the volume of money the company operates?

With new competitors in the market, Netflix will have to constantly update its content library if it must maintain its position. With blockbusters like Squid Game, one hopes that Netflix will remain the top contender.